Solutions that share out all benefits equally among all are the best, but sadly these are of no interest to solution profiteers

Let us suppose a hefty carbon and gas tax was levied and all its revenues distributed equally among all citizens... like helping to fund a Universal Basic Income

Something along the lines of Climate Leadership Council's proposed Carbon Dividends

Would that help the environment? Of course it would!

Would that help to reduce inequalities? Of course it would!

Such ideas have been proposed but why do they not get sufficient social traction?

The climate-change-fight profiteers, those so abundant in the frontlines of all environmental concerns, do not find that to be in their best interests.

The redistribution profiteers, those so abundant in the frontlines of all social concerns, and the political power grabbers, do not find that to be in their best interest.

Tell me, what do we do? A revenue neutral carbon tax is surely more important for the health of our planet than a couple of quite wishy washy populist Paris agreements, which end up being just great photo-ops for political profiteering.

PS. This is what I proposed for Mexico

My constituency and me

Again my constituency and me 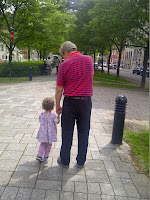 Promises will evaporate in the heat

Being truly responsible with the poor nations on the issue of climate change is to always remind them that, at the end of the day, they will most likely be on their own since, as usual, promises of help, will most probably evaporate in the heat.

If you want to help out, sell an insurance against unfullfilled promises made by developing nations and let any such derivatives trade openly.

Be careful! We could end up toast!

If we leave regulating how we treat the environment, climate change or global warming in the hands of something like the Basel Committee for Banking Supervision... we will most probably end up toast

We are all indigenous!

I do not pretend how to solve it and neither am I set dead against them but, Carbon emissions trading which involves the trading of permits to emit carbon dioxide has too many similarities to the indulgences of sins for me to feel completely relaxed about it.

I do not want to create more confusion than what already exists on climate change and global warming and of course to also find the right words to explain and motivate the right actions. Therefore I always appreciate any private and discreet (perkurowski@gmail.com) suggestions about to how to better word my posts in English, and now and then even an outright correction.

My Voice and Noise